A couple of weeks ago, our town around the castle was transformed into a medieval village for la fête médiévale.

It happens every year during the third week-end of August and it helps that our town of Tarascon has a castle built in the early 1400’s by René d’Anjou, or bon Roi René, Good King René, as he was known by his Provencal subjects and otherwise known as le Comte de Provence (he had many titles).  The cars are diverted away from the castle, straw bales are delivered and scattered about, traffic signs are covered with camouflage netting and violà, you could be on a film set for Joan of Arc, whose story incidentally was the theme to this year’s fête.

And if you thought that the connection with Jeanne d’Arc, who never came to Provence, was a bit tenuous, you’d be mistaken.   Jeanne d’Arc‘s mission, as I’m sure you all know,  was to rid France of the English and put the Dauphin, later Charles VII on the throne.  The Dauphin was married to Marie d’Anjou, who was the sister of René d’Anjou, (builder of our castle).  It was René who introduced Jeanne d’Arc to the young Dauphin and rode beside her at the siege of Orleans (some say they may have been lovers, but that is probably medieval tittle tattle as it would suggest that she wasn’t a virgin, which couldn’t be right).

All this was re-enacted for us during the course of the festival in a medieval pageant, testing or adding to our knowledge of French history.

When not at war, or about the Court of Charles VII, Good King René was also a writer and a patron of the Arts.  He wrote a detailed treatise on the rules and etiquette of the tournament called Forme et Devis d’un Tournay.  He created an order of Chivalry called Ordre de Croissant, and in 1449 enacted Les Pas de Begères here in Tarascon, which involved tournaments between noblemen, dressed as shepherds, jousting for the honour of a noblewoman, dressed as a shepherdess (René’s reputed lover at the time, seems he got about).

The winner got a kiss from the shepherdess, a gold stick and a diamond and after wards a huge banquet was laid on for the neighbouring noblemen and women who were served hedgehog, porcupine, stork and peacock prepared with exotic spices from the Orient.  An enormous pâté in the shape of the castle was also served, which when cut, had rabbits, hares and birds leaping and flying from it to the sound of trumpets, fifes, horns and tambourines.

Well, I can’t say that I have so far witnessed such a feast during the fête, but various tournaments did take place around the town with men demonstrating their jousting skils and dexterity on horseback.

There was also a demonstration of falconry, a sport no doubt popular in René’s time.

There were also manifestations of everyday medieval life provided by the traveling camp of medieval reenactors.  They arrived on the Friday morning and set up their tents in the medieval village around the castle.

They cooked with medieval implements and ate medieval food

and drank beer and mead in a medieval tavern.

There were medieval craft shops

In fact everything you might need to live a medieval life.

Everywhere you looked people were dressed in medieval clothing.

There was even a medieval executioner 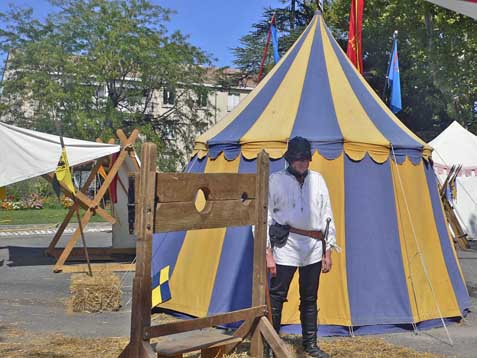 There were medieval troubadours 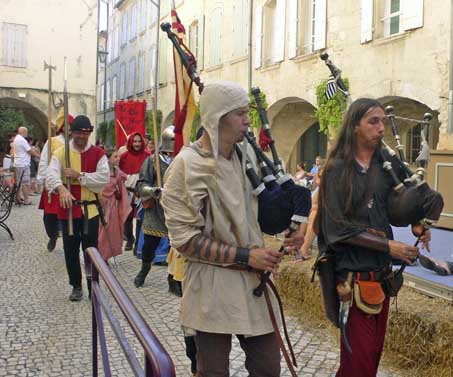 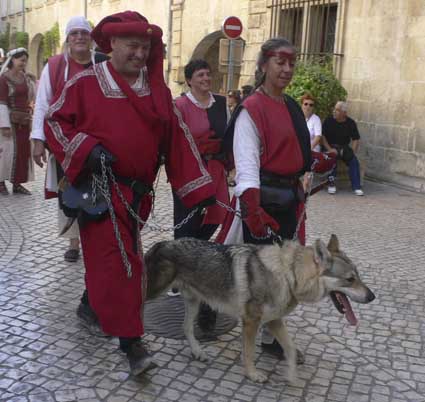 And sure enough, medieval line dancing

The festivities went on long into the night, with banquets, son et lumiere, celtic bands and fireworks and canon fire.  It was quite a relief when it was all over and we could get back to normal life.

And if you think you recognise anyone from my photos of the fête de la tarasque,it is entirely possible.

Please leave a comment.  If you’ve enjoyed the read, why not think about subscribing in the box at the top of the right column to receive regular updates.

Located in the heart of the historic town of Tarascon, at the foot of the Alpilles and on the banks of the River Rhone, this townhouse dating from the 17th century has been fully renovated retaining many of the original features and is available for self catering holiday rental as well as being on END_OF_DOCUMENT_TOKEN_TO_BE_REPLACED