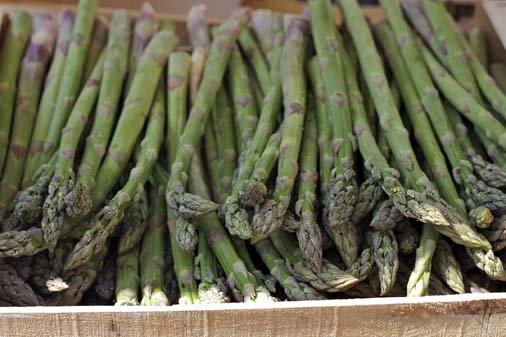 Asparagus has just started to appear in the markets in Provence.  I love asparagus and even though it’s the beginning of the season and therefore still a little pricey, I can’t resist buying a lovely big bunch.   The French like the white asparagus which are grown in beds where the earth is banked up around the plants depriving them of sunlight and thus preventing photosynthesis to occur, but I prefer the green tender tips and buy them from the producer in the market who I know has cut them from his own beds that morning.

The asparagus stems are woody at the bottom, especially the larger ones and so the ends are often peeled to make them palatable.   However my favourite way of preparing asparagus is to get rid of the woody bit entirely.   If you hold the asparagus and bend it slightly it will naturally snap at the point where it becomes tough and you can then eat the whole stem.

This of course leaves the dilemma of what to do with the bits you have snapped off as it would be a terrible waste to throw them away.  Being someone who hates waste, I have come up with a recipe for Asparagus soup using just the woody end.  Here it is. 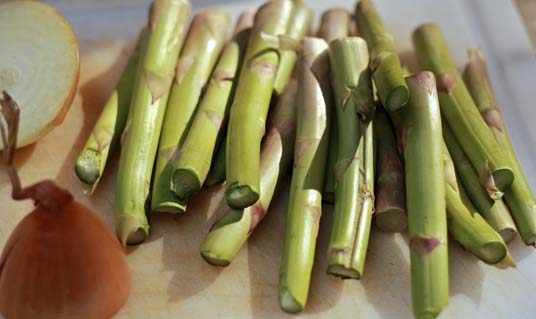 Heat the olive oil in a large pan.  Chop the onion and cook in the oil until translucent.  Chop the carrot and quarter the potato and add to the pan with the asparagus ends.  Cook in the oil until softened, approx. 5 minutes, then add 1 litre stock and cook for twenty minutes when all the vegetables are soft.  Add salt and pepper according to your taste. 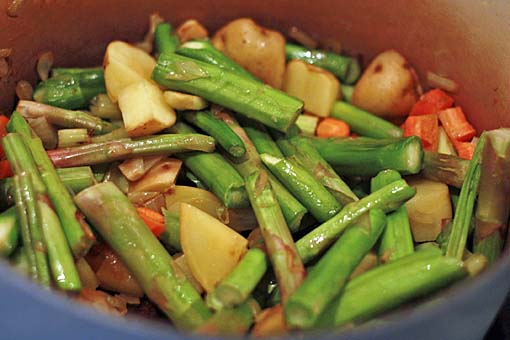 Next put the soup through a French food mill.  If you don’t have one, either put it into a blender or a food processor, but you will then have to strain it afterwards to get rid of the stringy bits of the asparagus. 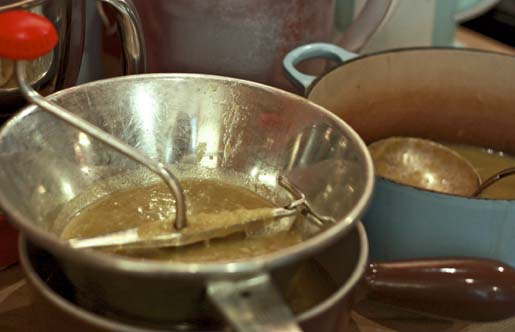 Toast a slice of day old baguette, spread with goats cheese and pop under the grill for a minute or two until it starts to brown.  Serve the soup with the goats cheese toast and a scattering of chives or a dollop of creme fraiche.

Located in the heart of the historic town of Tarascon, at the foot of the Alpilles and on the banks of the River Rhone, this townhouse dating from the 17th century has been fully renovated retaining many of the original features and is available for self catering holiday rental as well as being on END_OF_DOCUMENT_TOKEN_TO_BE_REPLACED