Staying at Lower Buckton Country House is an opportunity to experience a slice of English country life at its eccentric best.   Situated on the Herefordshire, Shropshire and Welsh borders it is a short distance from Ludlow which is renowned for its many restaurants and annual food fair.

When you arrive, Henry or Carolyn, will show you to one of four rooms, the Blue Room, the Pink Room, the Yellow Room and the Lilac Room.  The Blue and the Pink rooms both have ensuite bathrooms with large cast iron baths, the Yellow room an en-suite shower and the Lilac, which has twin beds, has a dedicated bathroom.

My personal favourite is the Blue Room, with its views across the lawn to the rolling hills of Herefordshire beyond.  There is barely another building in sight and you can easily imagine yourself being in another time.  The house, which dates back to the 19th century and was originally a farmhouse and part of the Harley Estate still has few hints of 21st century living (except for the ipod dock radio alarm and wifi throughout) but lacks nothing in comfort.   The rooms are spacious and decorated with an eclectic mix of furniture and fabrics, including vintage shoes and handbags that Carolyn has collected over the years.

Once installed and bags deposited, you will be invited to come down into the drawing room where home-made cake or scones and tea will be served around the wood burning stove under the watchful gaze of one of Henry’s forefathers.  In the summer, weather permitting, you can choose to have your tea outside under the shade of a leafy tree.

For dinner, there are many restaurants and gastro pubs nearby to choose from, including several Michelin starred restaurants in Ludlow. However if you’d rather dine in, Carolyn will cook for you,  just let her know at the time of booking as everything is cooked from fresh and takes a while to prepare.

If staying in for dinner, you might find yourself sharing the long dining table (it can seat as many as 20) with other guests, or not depending on how many people are staying.  The linen napkins, antique silverware and candlelight from the silver candelabras give an ambiance of stately times gone by.  A typical spring menu can go something like this: Mackerel paté to start with followed by rolled lamb with wild garlic stuffing, spelt risotto and fresh greens from the garden.  For dessert, Panna Cotta with rhubarb, followed by local cheeses (one hard, one blue, one soft) and oatcakes, followed by chocolate amuses, tea or coffee.  If you fancy a glass of wine with your supper, then you have to bring your own, as they don’t have a license to serve alcohol. 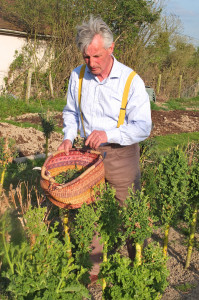 Everything that is served at Lower Buckton is made in-house, from the bread to the oatcakes to the chocolates and if not grown or made on the premises, is sourced locally.

To say that Carolyn is a locavore is putting it mildly, she is downright militant about her beliefs regarding seasonal locally sourced ingredients, from the flour she uses in her bread to the barley she uses in her risottos (and we’re talking about the difference between flour milled in Herefordshire or Gloucestershire).  She is an ambassador of the Slow Food movement and can proudly claim that she has not set foot in a supermarket for 10 years at least.  She is of course very much helped by having one of the best butchers in the county on her doorstep, AH Griffiths in Leintwardine who slaughter as well as butcher their meat on the premises and just outside Ludlow is the excellent Ludlow Food Centre where Carolyn buys her cheeses, grains and oils.

Besides growing their own vegetables and herbs, Carolyn and Henry have their own chickens, (you can see them scratching about in the flower beds) that provide the eggs for their award winning breakfasts.   Besides a traditional breakfast with a choice of bacon eggs, sausages, mushrooms, tomatoes and toast there is pressed apple juice made from their own apples along with homemade muesli, jams and marmalades.

If you are more of the glamping kind of traveler, you might prefer to stay in the Shepherd’s Hut which is located in a field over the stream in the Millstream camp.  The hut is very cosy with its own wood burning stove along with everything you might need to enjoy an al fresco experience including an outdoor kitchen and bathtub, heated by an open fire, and outdoor privy.  There is also a teepee to retire to if the hut gets too crowded or you want to do some solitary navel gazing.

And if you don’t want to leave your horse or dog at home, you can bring them along too to explore the beautiful rural countryside also known as the Welsh Marches, or Mortimer Country.  (There is a £15 pound charge per horse per night for paddock and/or stable with bedding, again please notify Carolyn in advance if bringing pets). 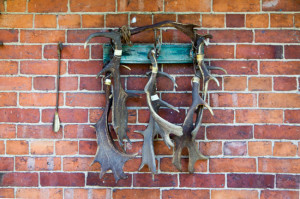 Disclaimer: Before moving to Provence, the Artist and I used to live in Shropshire and since moving away from the area, we have often stayed with our friends Henry and Carolyn at Lower Buckton Country House making this review totally subjective.  However I stand by every word and further more, if you decide to book a stay from reading this article, ask Carolyn for a glass of sherry from the bottle that I left behind the bookcase.

Located in the heart of the historic town of Tarascon, at the foot of the Alpilles and on the banks of the River Rhone, this townhouse dating from the 17th century has been fully renovated retaining many of the original features and is available for self catering holiday rental as well as being on END_OF_DOCUMENT_TOKEN_TO_BE_REPLACED