Last December and January, I found myself unexpectedly in Los Angeles.  My only regret, other than being away from my husband and dogs, was that I had enrolled in a day’s sourdough making class with Vanissa Kimbell, which I had been very much looking forward to.  When I sent her an email, expressing my regret at having to miss the day, she suggested I might find someone in L.A. to spend some sourdough making time with instead.

As it happened, my friend, Julian Davies who works at the Cheese Store in Silver Lake gave me some bread to taste, which they sell there.  It was delicious and I asked for an introduction to the baker who made the bread. The baker was Mark Stambler of Pagnol Boulanger and having got in touch with him, he very generously invited me to spend the day (s) with him making his wild yeast (sourdough) bread.

To say that Mark is passionate about bread making, is putting it mildly.  Besides changing California State legislation, to allow him (and other California home bakers) to sell bread that he makes in his own home, (before that food that was sold commercially could only be made in commercial premises); he is also very specific about the wheat he uses and the soil that it’s grown in, preferring the methods used by biodynamic farmers.  Having found a variety that met his standards, he was devastated when the farmer he bought it from decided to stop growing it.  After much searching, he has found another farmer who will grow it for him with the seeds that he has provided.  The first crop should be ready later in the year.

The milling of the grain is also very important to him and he mills it himself, a batch at a time according to his needs, believing that the fresher the flour, the better the loaf. Inspired by the book The Bread Builders: Hearth Loaves and Masonry Ovens by Daniel Wing and Wan Scott, he built himself a wood-burning oven in his back garden to further authenticate the traditional methods he uses to make his bread.   The loaves he makes today are as close to what Marcel Pagnol might have bought when he lived in my town of Tarascon in 1915 when he was teaching at the college here  (the elementary school is named after him) and lived in the next street to my house.

In fact Pagnol could have been chewing on the crumb of one such loaf whilst scribing the novel that later became the films Jean de Florette and Manon des Sources (his novel was one book L’eau des Collines) or even The Baker’s Wife (1938 uncredited screenplay and directed by Pagnol) as the method that Mark employs today is the same as was used 100 years ago in bakeries across France and Europe.

But enough of coincidences, back to 2015, this is how the day went with Mark Stambler of Pagnol Boulanger in Los Angeles.

I arrived about 10 am, avoiding the rush-hour between Santa Monica, where I was staying and Los Feliz, where Mark lives.  Mark under the name of Pagnol Boulanger makes three types of bread, a Pain Levain, a Miche Pointe-a- calliere (a large round sourdough) and a Rye bread.  As I arrived he was already working on the third step of the three step method of the bread-making, the first step being the adding of flour and water to the starter and leaving this for 4 – 6 hours and then adding the ingredients of the second build and leaving this for 10 – 12 hours, or overnight.

He was now making the dough, mixing water, flour and salt, which he left to hydrate for 20 minutes (autolyse) before adding to the second build.  This was then left for 3 hours, stretching and folding twice at one-hour intervals (the rye bread does not need stretching and folding as it has no gluten to break down).

After this he cut and weighed and pre-shaped the dough into balls and left for 15 minutes after which he tightly rolled the dough according to their final shape.

He folded the Pain Levain into tight batards, which he then put into folded canvas to hold their shape and the Miche Point-a-calliere into tight boules that he put into canvas lined baskets and the rye bread into bannetons to give them their characteristic ridged shape. He then put all the shaped loaves into the fridge (at 40° f.) where they would stay until the following morning. I headed back to Santa Monica, the day’s work being done and the traffic mounting. The next day I arrived back at Mark’s house, ready for the final step in the making of his bread.  He had already lit the fire in his bread oven (at 4 in the morning) and the temperature was now at its optimum heat. He shoveled out the hot coals, sprayed the inside of the oven with water to create steam and then inserted the bread loaves, which he had previously slashed. You can read more about Mark Stambler and the Pagnol Boulanger on his website, here http://stamblersbread.com/

Back in the UK I was keen to make my own sourdough bread based on Mark’s methods and he very kindly let me have his recipe for Miche Pointe-a-calliere and gave me permission to reproduce it here.  I was also very excited to find some bio-dynamic flour to use in the loaves grown at Plawhatch Farm in Sussex.

You will need altogether

Add to first build and let rise overnight in a tightly covered bowl 10-12 hours in the fridge.

Put flour onto the table top and turn the dough out onto the table.  then pre-shape, rest for 15 minutes at room temperature and then fold into a tight ball and put into a lined basket or banetton.  Secondary fermentation (as loaves) overnight in the fridge or 30 – 60 minutes at warm room temperature.  Preheat oven to 450f or 232c and place a large baking tray on the bottom of the oven filled with water.  Turn the loaf onto a hot baking stone or baking tin and bake for 25 – 30 mins, turning to brown evenly, if necessary.

And here’s one that I made earlier….I hope Mark will approve!

This recipe is not very detailed and does suppose that you understand the fundamentals of making sourdough bread.  If you have any questions, please get in touch below.    All your comments are always very welcome.

Located in the heart of the historic town of Tarascon, at the foot of the Alpilles and on the banks of the River Rhone, this townhouse dating from the 17th century has been fully renovated retaining many of the original features and is available for self catering holiday rental as well as being on END_OF_DOCUMENT_TOKEN_TO_BE_REPLACED 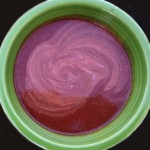