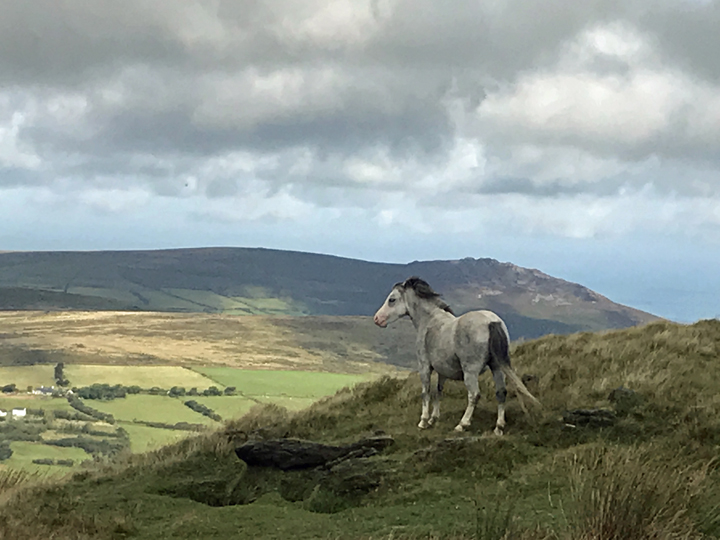 Last week I found myself in Pembrokeshire, Wales, taking part in a 14 mile walk across the Preseli Hills in aid of the Busoga Trust. It all started with a round robin email sent by Lucy Bakr of Saint Remy, Provence, to raise money for the charity that builds wells and water sanitation schemes in remote parts of Uganda.

We were 9 in total and this was the third year the group, 5 of which consisted of Lucy and her siblings, had done such a walk in memory of their mother, Frances, who lived in Uganda and started the family’s fundraising (the first walk was in the Peak district, hence the name).  This is how the day went.

We set off from Bwlch Gwynr the western end of the walk and head east along the ridge of the Preseli Hills, known as The Golden Road.   It is a path that has been trodden for, some 5,000 years and will take us through Bronze Age burial grounds and Iron Age fortresses steeped in ancient folklore. 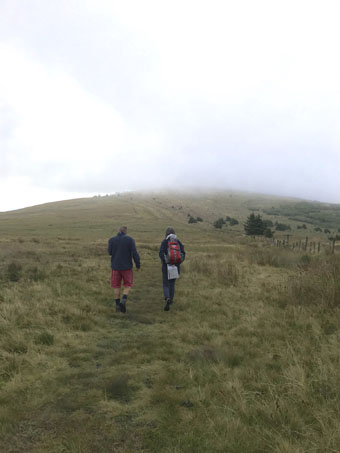 The early morning mist still hangs in the air as we start our ascent towards Foel Feddau, a bronze age burial mound.  As we near it we see wild ponies and a lone crow silhouetted against the sky. The crow flies off, but the ponies come towards us, presumably hoping for a share of our snacks.

The views from here are spectacular and we can see out to the Irish Sea, not a bad place to be a pony.

From there we pass through rocky outcrops, said to be the graves of King Arthur’s knights who fell here after the battle with a ferocious boar as told in the Mabinogion, a collection of Welsh myths and folklore.

We then come to Bedd Arthur, a ring of stones placed in the shape of an eye that is said to be the grave of King Arthur himself, despite there being a few thousand years between its creation and the supposed time of King Arthur’s life.

The walk continues through soggy moss, heather and grass. We learn to avoid areas where reeds grow, as reeds like water and therefore is an indication of swampy ground. Most of us have wet feet as we arrive at the halfway point at the end of the Golden Road. We turn back and make a de-tour to climb up Foel Drygarn, an Iron Age fortress, where we stop to eat our sandwiches. My feet are beginning to feel the rub and I take my socks and boots off to reveal blisters, luckily I brought plasters.

On the way down my left knee starts to ache. This is supposed to be a moderate walk and I’m beginning to realise that the others are a lot more accustomed to long distance walking than I am.

We take a different route on the way back to take in the Carn Menyn, which we missed on our way down. 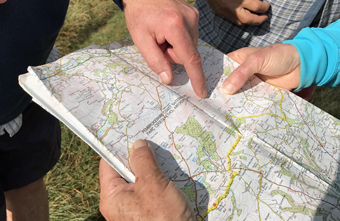 We lie down on the King’s Table, and try to identify the blue rocks from which the monoliths that form the inner circle of Stonehenge supposedly came from. If you hit the rocks with a handheld hammer stone, they are said to give out a metallic sound as do the stones of Stonehenge. Unfortunatley we can’t find a hammer stone, so the theory remains untested by us.

We carry on skirting around the path we took before. My knee is really hurting now and I’m starting to wish that I had stopped at the halfway point and waited for the others to pick me up in the car. But then I reflect on the fact that this walk is in aid of people who have to walk many miles every day for their drinking water and basic sanitation needs and I soldier on.

Ros, Lucy’s sister, kindly gives me 2 neorofen, which soon ease the pain and I learn that neurofen, along with water, plenty of snacks and plasters are a necessary thing to have in your backpack when going for a long hike like this one.

We go to the nearby pub and have a much needed pint of beer, Old Legover in my case, to reward ourselves.

Later I have a long soak in the tub in our B&B Over the Rainbow before eating a very tasty vegetarian paella and drying our boots by the woodburner. 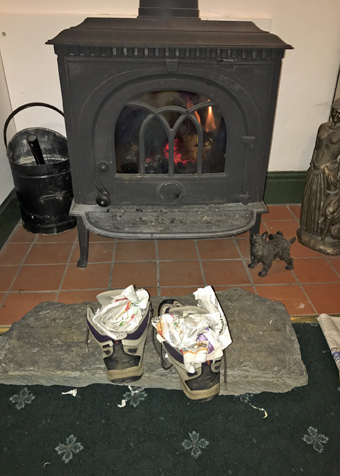 With thanks to everyone who donated to this very worthy cause.  We raised more than the target of £3,500, with giftaid it came to £4,687.50.  Enough to build one well and put money towards a girl’s school sanitation building.

If you would like to donate and haven’t done so yet, it’s not too late.  Here’s the website at Virgin Money Giving

Located in the heart of the historic town of Tarascon, at the foot of the Alpilles and on the banks of the River Rhone, this townhouse dating from the 17th century has been fully renovated retaining many of the original features and is available for self catering holiday rental as well as being on END_OF_DOCUMENT_TOKEN_TO_BE_REPLACED