Last weekend I decided to take a trip to Hamburg.  My mother grew up in the city and as a young child our family would spend the summer holidaying on the Baltic coast nearby.   I hadn’t been there since visiting my Grandmother in my teens and I decided it was time to revisit the city and find out what memories I had of it and whether any of it would be familiar to me today.

Hamburg lies on the river Elbe about 60 miles from the North Sea.  At the heart of the city is its harbour which is one of the largest ports in the World and in the late 19th, early 20th century was the main embarkation point for people emigrating from Germany and Eastern Europe to the United States.    As part of the Hanseatic League (association set up by Northern German towns in the 12th century to protect their trading routes), Hamburg had free trading and self-ruling status and  enjoyed special relationships with other sea-faring countries, especially the British with whom they shared trading interests going back to the 13th century.  It was a very cosmopolitan city as traders and shipping companies from all over the World set up home here, as well as refugees fleeing from oppressive regimes and religious persecution from neighbouring countries.   Hamburg lost its independence in 1933 when the Nazi party came into power.

Large parts of Hamburg were destroyed in WWII after the British and the Americans bombed the city during a week long bombing raid in the summer of 1943, creating a huge fire storm and killing an estimated 42,600 civilians as well as leaving huge parts of the city flattened or in ruins.

As a consequence of the devastation the city today has a look and feel of timelessness; a 19th century merchant’s house sits between 20th century blocks of flats and cranes rear up behind 100 year old warehouses and dominate the skyline behind huge container ships lying anchored along the shoreline.

Inland, Hamburg is a green and leafy city with many parks and trees.  The roads and pavements are wide and bicycle friendly.  In fact, you have to watch out for cyclists as they share the pavement with pedestrians (they have a marked track) and come whizzing past, presuming the pedestrian to know what side of the pavement they should be on. 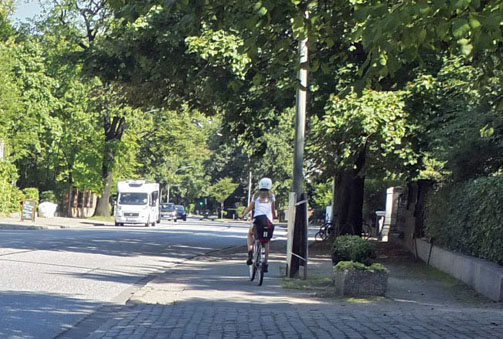 There are many cobblestone streets, reminding you of the city’s past, even though the buildings that lined them no longer exist.

Which ever direction you take, you will soon come across water.   North of the harbour is the old city centre built around the two lakes the Binnenalster (which was originally within the old city’s walls) and the Außenalster (outside the city’s walls).  They were created by daming the Alster river in 1235.

Some of Hamburg’s wealthiest houses are around the lakes, including the Anglo-British Club, which was created in 1947 for British officers stationed in Hamburg after the War (membership for men only).

The lakes are used recreationally by the locals for sailing, rowing, canooing, swimming, running, cycling and walking around etc. and if the winters are cold enough, they become a giant skating rink with stalls selling Glühwein and sausages.

Hamburg also has a series of canals, more than Amsterdam and Venice combined and the city has over 2,000 bridges.  You can take a boat-trip to tour the lakes, canals and harbour, however, I did my exploring on buses and on foot.  If you buy a 9 Uhr Tageskarte you can travel anywhere within the city centre and inner suburbs (including to the airport) for €5.60 after 9am on the buses and S/U Bahn (underground).  You can also use the ticket on the harbour ferry to cruise up the river and give yourself your own harbour cruise.  Take the the 62 ferry from Landungsbrücken to Finkenwerder (on the other side of the river) and from there get the 64 to Teufelsbrücke.

From there you can walk back along the river’s edge to Neumühlen (where you can pick up the 112 bus to Altona) stopping along the beach at Övelgönne for a beer or ice-cream, dip your toes into the water or just sit and watch the boats go by.

To get a view of the city from above, you can go to the Mahnmal St -Nikolai, built between 1874 and 1876.  It is Hamburg’s tallest building after the Rundfunkturm (the TV tower) and a glass lift takes you up 76.3 metres for spectacular views of the city and harbour below.

The spire of the St Nikolaus was used as an orientation  marker for the British bombers in WWII and the church was consequently badly bombed during the air-raids.  Miraculously the spire survived and along with the ruined walls now stand testament to the carnage of war.  In the crypt a permanent exhibition of photographs and films of the destruction of Coventry and Warsaw by the Germans and the bombing of Hamburg by the Allies is a reminder of the horrors of civilian suffering and casualties caused by the War.

At the end of my brief stay, with an hour left before getting the S Bahn from Altona station to the airport, I wondered around the station and came across Mercado an indoor market with stalls selling local food and produce alongside imported Italian, Turkish and Asian delicacies.   You can sit and enjoy a snack with a glass of wine or coffee, or you can buy something to take away.  I stopped at this bakery and admired the variety of bread-loaves, sold by the slice.

But it was the plum cakes that grabbed my attention, or Zwetschgentorte. 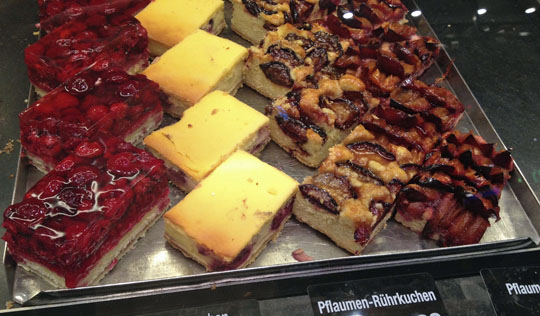 One bite of this

and memories of sand and wasps on the Baltic coast as a five year old came flooding back to me.

Here’s a version of the plum cake that I made when I got back, though it is traditionally made on a sourdough or yeast base, (making it almost savoury tasting) I decided to make this with baking powder.  This is adapted from a recipe from Marions Kochbuch

Grease a round or oblong tin.

Cut the plums into quarters and take out the stones

Mix the flour, baking powder and salt in a bowl.  Add the sugar and vanilla powder.

Add the butter, eggs and milk and knead into a dough with your hands or using the dough paddle on your mixer.

Roll the dough out onto a floured board and shape according to the tin you are using.  Roll the dough up onto the rolling pin and roll it out onto base of  the tin.

Prick the dough with a fork and arrange the plums snugly on top.

Bake on the second rung from the bottom of the oven for about 40 minutes.

If using almond flakes, toast them in the oven for a few minutes and sprinkle on top.

Leave to cool and serve with whipped cream. Bon Apetit!

Located in the heart of the historic town of Tarascon, at the foot of the Alpilles and on the banks of the River Rhone, this townhouse dating from the 17th century has been fully renovated retaining many of the original features and is available for self catering holiday rental as well as being on END_OF_DOCUMENT_TOKEN_TO_BE_REPLACED