Every year, from the beginning of July, the town of Arles becomes the hub of international photography.  Exhibitions are displayed in Arles’ many beautiful and ancient buildings (going back to Roman times) in and around the centre of the town with the main action happening in the old disused railway workshops.  The French are very good at re-cycling their buildings and the Parc des Ateliers is no exception.  The huge cavernous hangers, where formerly trains were serviced and repaired, give a unique backdrop to the exhibitions and are as much part of the experience of the festival as the photographs themselves.

Les Rencontres (meaning meetings) is a collection of exhibitions curated by different people every year working in the Arts.  From Here On, the exhibition in l’Atelier de Mécanique, had 5 curators Martin Parr, Erik Kessel, Joan Fontcuberta, Clément Chéroux, and Joachim Schmidt; this is their manifesto: 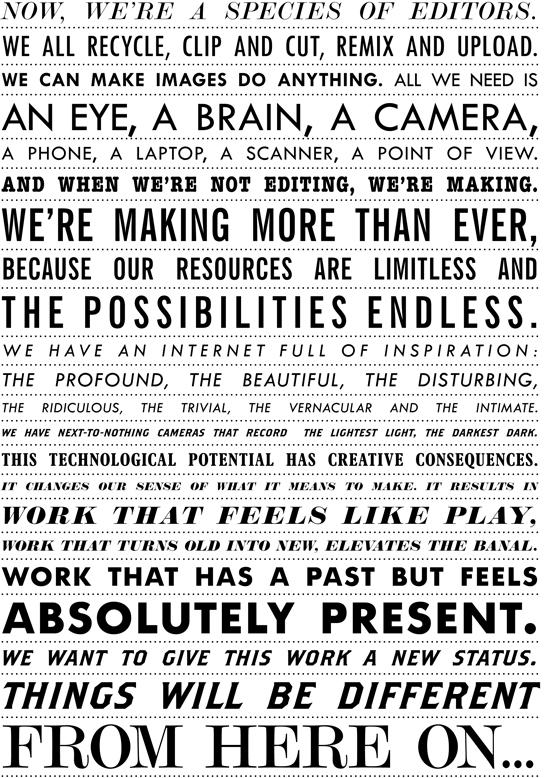 I was lucky enough to be taken on a tour of the exhibition, led by two of the curators, Martin Parr and Erik Kessels with the artists standing by to talk about their work.

Corinne Vionnet works with photos taken off the internet of well known tourist sites.  Here she has superimposed 250 snap shots of the Eiffel Tower, all taken from the same angle and giving the piece an Impressionistic look.

Behind you can see the Chicken Museum, which is an amusing installation by Thomas Mailaender who pasted random photos downloaded from the internet onto the walls of a plexi-glass cage containing live chickens.  Apparently their favourite photo is one of a pizza.

Penelope Umbrico talked to us about her wall of sunsets.  10,ooo new photos of sunsets are uploaded on flickr in a week and she downloaded a day’s worth for the show, cropped each photo so only the sun remained and then printed the image onto 4 x 6 Kodak paper.

My favourite contributor has to be by Nancy Bean the three legged cat from Devon, not because her photos are very inspiring or even interesting, but just because I have always wanted to put a camera round my cat’s neck to see what he gets up to.  Apparently Nancy goes round to the neighbours and watches TV; another form of neighbourhood watch maybe?

There are 36 artists who have contributed to this exhibition and only one, Hans Aarsman, has physically taken any photographs himself.  These are of objects which he wanted to throw out, but felt too sentimental about, so decided to photograph them and keep the photo instead.  He also took photos of things he thought he might like to own, which included a house, a car, books and a pair of shoes.

The rest used various means to capture their images, mostly from photos posted on the internet and also from google images, public webcams and one from photographs taken by traffic wardens of illegally parked cars in Brighton.

Having just bought my first SLR camera with all its accoutrements including books on ‘how to’ get the best photo, you can imagine how upset I was to learn that the medium was now finished and I was way behind the times!  Seems I should be using the webcameras in my super market and street to take photos for my blog!

Elsewhere there are more traditionaly taken photographs on display with this year’s major theme being Mexico.  In the Musée outside Arles, photographs taken by Robert Capa, Chim (David Seymour) and Gerda Taro during the Spanish Civil War (1936-39) were displayed in the exhibition called The Mexican Suitcase.  The negatives for the photos were thought to have been lost, but showed up in Mexico in 2007 where they had been sent for safe-keeping during the war.  The photos, many of which were used in news stories at the time, show men in battle and the effect the war had on the country and its civilians.

There is an exhibition of photographs taken during the Mexican Revolution in L’Espace Van Gogh, as well as photos by Graciela Iturbride of portraits of the women of the Juchitán in Oaxaca and Gabriel Figueroa who was a stills photography for Mexican films and worked alongside John Ford, Luis Bunuel and John Huston amongst others.

From China, Wang Qingsong is showing The History of Monuments, in L’Église des Trinitaires, which is a work 42 metres long and looks like a modern Bayeux Tapestry displaying 200 people in various poses covered in mud.

It is an impressive feat until you go to The New York Times Magazine Photographs  exhibition in L’Église Sainte-Anne and see photos of oil workers in Kuwait similarly covered in crude oil as they try to staunch the fires caused by the ‘Scorched Earth’ policy of the Iraqui military forces as they retreated from the country.

There are 47 exhibitions in total which are on until the 18th September, which is just as well, as I’ve been going for a week and have only got round a quarter of them.  Most of the exhibitions are in and around Arles, but also extend as far as Abbaye de Montmajour, a beautiful abbey dating back to the 10th Century on the road to Fontvieille, which I urge you to go and visit, as much for the exhibitions as for the amazing views of the surrounding countryside seen from the top of the tower. 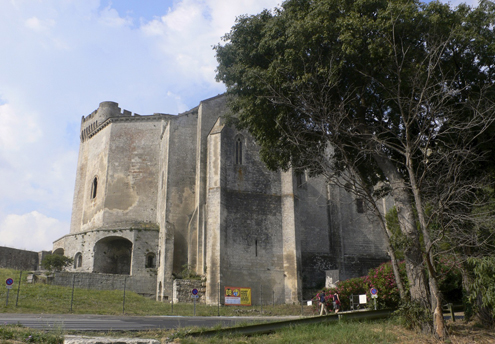 As always your comments are very welcome.

Located in the heart of the historic town of Tarascon, at the foot of the Alpilles and on the banks of the River Rhone, this townhouse dating from the 17th century has been fully renovated retaining many of the original features and is available for self catering holiday rental as well as being on END_OF_DOCUMENT_TOKEN_TO_BE_REPLACED