What is in a Niçoise Salad?

But according to Niçoise lore, this would not be the vrai, (real) thing at all.  A true Niçoise Salad should not have any cooked vegetables or lettuce in it, no potatoes and no beans; just tomatoes, green peppers, shallots and artichokes (the small purple ones that you can eat raw), or broad beans, (raw, shelled if they are too big), anchovies and Niçoise olives (the little black ones) and some torn basil leaves.  It is in fact a spring to early summer salad, when the broad beans and artichokes are still young and the tomatoes are just starting to ripen.

Having realised that I had been wrong all these years about what I thought a Niçoise Salad should consist of, I decided to do some investigating to find out where my, and a lot of other people’s, notion of the Salad came from.

I started with  French Provincial Cooking by Elizabeth David, to see what she had to say about it.  Here it is:
“Arrange a quartered salad into your bowl.  Add 2 hard boiled eggs, cut in half, 2 very firm quartered tomatoes, not more than half a dozen anchovy fillets and 8 or 10 black olives, and if you like them, a few capers. Only when the salad is about to be eaten, mix it with the dressing, made from the best fruity olive oil you can lay hands on, tarragon vinegar, salt, pepper, a crushed colve of garlic. It is up to you to choose the other ingredients: tunny fish, cooked french beans, raw sliced red peppers. beetrood, potatoes, artichoke hearts. It depends what is to come afterwards.”
So there you see, she already mentions a lettuce.  She starts off with very specific ingredients,  but then goes on to give us free reign to do what we want!

With this sort of guidance, how were we to know we were flaunting the centuries-old rules of a Niçoise Salade?  She then goes on to cite a few more versions:

1) Escoffier’s version, which uses Tuna fish in oil, Tomatoes, diced anchovy fillets, tarragon, chervil and chopped chives, with or without mustard (no mention of a vinaigrette here). 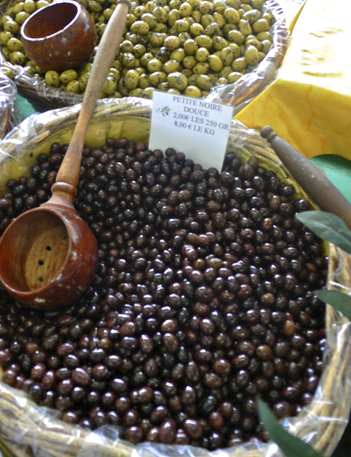 3) Escudier’s version from La Véritable Cuisine Provençal et Niçoise specifies a flat or oval dish on which a layer of, lightly salted, sliced tomatoes, (no seeds) are arranged.  On top of the tomatoes a layer of Anchovies are added and then chopped green peppers and black olives.  This is ‘moistened’ with olive oil and vinegar and chopped Basil leaves.  Hard boiled eggs may be arranged around the border of the dish. 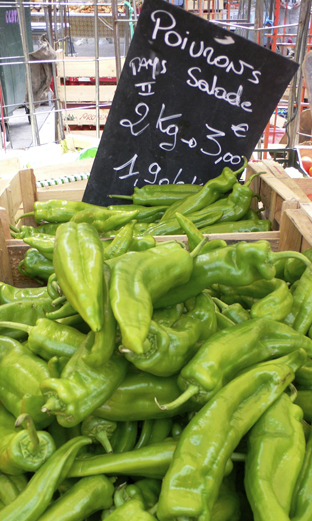 I then looked to Julia Child who did for Provençal cuisine in America what Elizabeth David did for it in the UK.  Her recipe goes as follows:1 large head Boston-lettuce leaves, washed and dried

It would seem that both Elizabeth David’s and Julia Child’s recipes have been misinforming us for decades as to what a true Νiçoise salad should be.  Would we have added lettuce if we weren’t told to?  Or boiled potatoes, or cooked green beans? 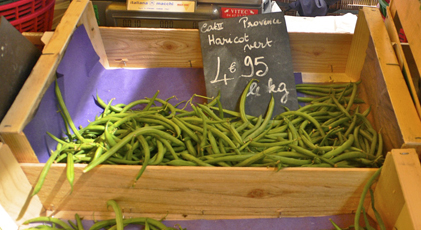 Anyway, I decided to ask my market vendors what they put into their Niçoise Salad. First of all I asked the lady who lives in the Camargue, near Arles who I buy my eggs and goat’s cheese from.  This is what she said she puts in her salad:  “tomatoes, green beans, tuna, some chopped white onion, small green peppers, Nyons olives and rice!” 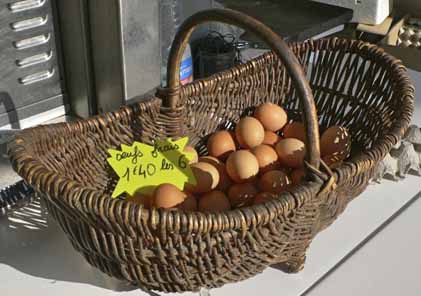 “Rice?” I exclaimed, surely this was a Camarguaise version, but she insisted that it was a true Niçoise Salade. She did add not to use too much rice, just a bit.

I then asked the man from Saint Remy who sells legumes from his small holding.  He said he didn’t have a clue as he wasn’t from Nice. 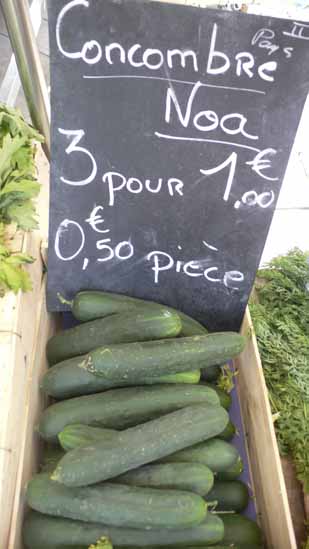 In the end, it seems that everyone has there version and  rules on what a Niçoise salad should be and I decided to carry on with my own as before.   My one rule, however, is that you have to use tinned tuna, fresh tuna is just not right!

Here is a can of tinned tuna in Sunflower Oil, which brings me nicely round to these photos of sunflowers that I took the other day, which were in a field along the side of the road to Arles (might Van Gogh have passed this same field, all those years ago, who knows?).

What do you think makes a Nicoise Salad?  Please leave your comments below.

Located in the heart of the historic town of Tarascon, at the foot of the Alpilles and on the banks of the River Rhone, this townhouse dating from the 17th century has been fully renovated retaining many of the original features and is available for self catering holiday rental as well as being on END_OF_DOCUMENT_TOKEN_TO_BE_REPLACED