There’s an old lady in my weekly market who I buy my eggs and goats cheese from.  She also sells some fruit and vegetables; whatever is in season from her farm, peaches in summer, apples in winter and asparagus in the spring.  She lives outside Arles in the Camargue with her husband and their animals and every week I ask her how her animals are and she says “Mieux que moi” better than me.   I then ask if I can come and visit them someday and she always says ‘non’, her husband doesn’t want any visitors to the farm.   I thought by now, with my weekly asking, I might have worn her down, but no bribery of prints of photographs of her and her grand daughter who works along side her, or sweet-talking will change her mind.   She has given me her first and final answer.

I was telling this story to a friend the other day, and he said, “I know a goat farm you can visit, and it’s just outside St Remy.”  He had been there only recently to buy some goats cheese himself.

“How old is she?” I asked, “Oh, about our age,” he said.  My excitement waned, I wanted an old vrai paysanne, on a farm with chickens running round, horses in the paddock, an orchard and out buildings that had been there for generations of the same family.

However time was pressing and so I decided I would try and find La Fromagerie des Alpilles, as it was called, maybe it would turn out to be what I wanted after all.

I followed my friend’s directions, and sure enough, on the road to the town of Maillane (birthplace of Frédéric Mistral) was a little sign, En vente fromage du chevre, with an arrow pointing down a track.  I drove down it and came to what looked like a modern house with a pool, all very neat and new looking. Beyond this were a number of goats standing outside a breezeblock barn.

I nearly turned around without stopping, but at that moment a woman came out of the house and smiled and indicated where I could park.  It was too late to say I was lost and I had to get out and buy some cheese, if nothing else.

I followed the woman through a beaded curtain into a clean white tiled room.  She asked if I had come to buy some cheese and I said I had and admitted that I was also looking to write a story about a goat farm, but maybe I had got the wrong farm.  She said that her husband could explain the process better than her and that he had just gone to turn the hay in the field up the road.  I could go and find him, or come back another time.

Meanwhile she offered to show me around.   First off we went to see the goats, the nanny’s were standing outside in their pen along with two very shaggy billy goats.

She explained that it was the mating season and the 90 or so nanny goats rely on two Billy goats to service them all.  In other words the Billy’s got to do a lot of shagging and little else; a life of Riley.

She then took me inside the barn where there were some kids, about six months old.  They were very inquisitive and keen to nibble my hand.  There were piles of hay for the goats to eat and the barn was clean and light with no goaty smell at all.

She showed me how the goats are milked at the end of the barn.  The nanny’s go from one side of the barn to the other and are milked en route by machine, (what no maiden milking the goat on a three legged stool? I inwardly whined). 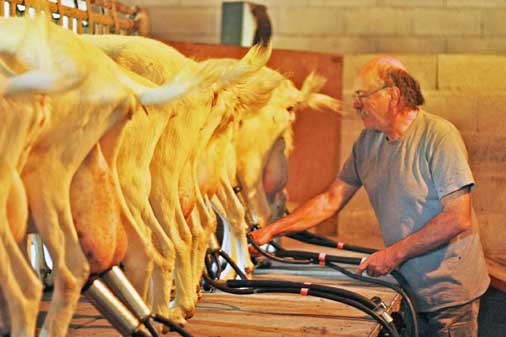 Next she showed me the cheese making process, back in the cooled tiled interior of the house.   It was so clean in there, I felt self-conscious about the state of my own hygiene.

She opened a door to another small tiled room, where a vat of goat’s milk was fermenting.  The milk is brought here and put into a plastic vat and a culture is added to start the fermenting process.  Then after 3 hours rennet is added and the milk then sits for 24 hours until it has properly curdled and become solid.

Next the curds are put into little plastic moulds with holes to drain their moisture.  The curd is called a faisselle and is often served as a dessert in France with sugar added and fruit and it is this that Little Miss Muffet was eating when the spider came down and frightened her away.

The curds are turned after 12 hrs and left for another 12 hours and then are salted on both side and left for another 3 hours or so, for the salt to coax out the last bit of moisture.   Most of the cheese is then put on shelves in a cold room, around 4°, to arrest their development and keep them as ‘fresh’ cheeses.

Others are put into a fridge with a temperature of 12° to 14° so that they can further mature and become creamy.

Before the fresh cheeses go out into the World, they are either left as they are, with a pretty sticker to say where they come from, or rolled in ash, coarsely milled black pepper, dipped in oil and covered with bais rouge, or covered in dried Tarragon or with a local herb found in Les Alpilles called sauriette.

As we are chatting, her husband arrives back from tossing the hay.  He takes me round the farm again adding to what his wife has already told me.

He and his wife came here in 1982.  Neither had a history of farming in their family, but it was his dream to raise goats and make cheese.  He found the land, which hadn’t been used for arable purposes for generations and slowly built the farm up to what it is now, adding parcels of land as they could afford it.  The goats are fed with his own crops and although he isn’t certified organic, he doesn’t use any fertilizers.  Which seems to be the way around here.

They sell the cheeses throughout the region, down to Marseilles and on to the Côte d’azur to restaurants and cheese shops, as well as to people passing by.   There is a great demand for their cheese and whilst the rest of the World is in recession, Monsieur tells me, they are not.

This article also appeared in the Foodie Bugle

Located in the heart of the historic town of Tarascon, at the foot of the Alpilles and on the banks of the River Rhone, this townhouse dating from the 17th century has been fully renovated retaining many of the original features and is available for self catering holiday rental as well as being on END_OF_DOCUMENT_TOKEN_TO_BE_REPLACED