People often talk about ‘the journey’ being the important thing in life rather than the getting there.  Here’s a  journey I recently found myself on in the pursuit of marmalade making.

The Artist, who likes toast and marmalade for his breakfast, was coming to the end of his last jar of Frank Coopers and said that he would like to try to make some himself.  As it was February, the end of the Seville orange season, I said I’d look out for some in my weekly market.

I soon realised that the French have little use for les oranges amerès. There weren’t any in our market and none in the huge wholesale fruit and vegetable depot nearby in Saint Etienne de Grès.  Not to be defeated I left a message on my local Anglo forum group, asking if anyone knew where I might find some.  Various people replied, but it turned out  that the nearest sighting of any were at least an hour away, which seemed a bit far to go (maybe the forum is not so local after all). 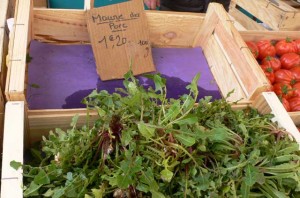 Is it a weed or is it a salad

The same week I happened to go to the market in Saint Remy; I was looking for some Maure de Porc, (a plant that grows wild in the Alpilles and is a bit like rocket but looks like a dandelion) which I didn’t find, but I did find bitter oranges.  They were sitting in their box amongst other fruit and vegetables biologiques (organic, very important as you don’t want any nasty pesticides on the skin). My excitement was such that I bought 5 kilos of them, along with some lemons.  When I got home and triumphantly showed The Artist my find, he told me his recipe only called for 1 kilo.

He then meticulously weighed the oranges, made little piles, wrote lists, washed jars and calculated how much sugar he would need.  The only thing he didn’t have was muslin which he needed to put the pith and pips into whilst the marmalade cooked. 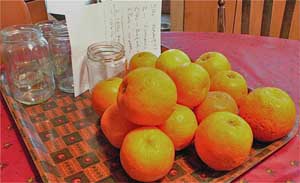 Muslin is about 50p a metre in London and working as a costume designer, I used to have reams of the stuff, but not here.  I looked the word up, mousseline, and started my search.  Again no result in my town or Saint Remy and no-one knew where I might find any.

Meanwhile my friend Celia was arriving from India and I had offered to pick her up at Marseille airport.  Co-incidentally Neassa, (my Ikea companion and friend) needed to swap her rental car at the airport and we decided to go together and have a ‘bit a day of it’ in Marseille where I was sure I would find muslin.  A friend had suggested I might find some in a store on the rue Aubagne, but I didn’t have a name for the store or an address.

I love Marseille and every time I go there I wonder why I don’t go more often.  Being a port town, Marseille has for centuries had  a large immigrant population; Italians, Corsicans, Armenians, Algerians, Turks, East Africans, Chinese and Vietnamese have all made their home in Marseille and brought with them their customs and cuisine which can be found in the shops and restaurants down the streets and back-alleys running alongside the main boulevards (I was recently very exited to find a bottle of Pomegranate Molasses in a Lebanese Deli).  The rue Aubagne is one of these streets.

We intersected it about halfway along and I had no idea which way to turn. The only French shop, squashed between bazaars selling suitcases, couscous cookers and spices, was a tiny alterations shop that  looked like it had been left behind from another era.   There was a little woman sitting behind a counter with a sewing machine on it, chatting to a friend (there was hardly room for anyone else in the shop).  When I asked if she knew where I might find some muslin, she said she didn’t know, but when I said I needed it to make ‘confiture’ she suggested I go down the road to a place called Maison Empereur, if they didn’t have it she said, they would know where I would be able to find it.

We walked down the street, it could have been any street in any North African city.  That’s Marseille for you, one minute you’re in a hyper-chic area, where they’re selling Longchamp handbags and then you turn a corner and they’re selling checky bags.

At the bottom of the street was a tall building with the words Maison Empereur, written across it in big letters.  We walked in and were immediately transported into yet another World.  It turned out that this was an old hardware emporium, or rather a quincaillerie, dating back to 1827 and supposedly the oldest one in France.  There were rooms and rooms of every type of hardware you could imagine, plumbing tools, plungers, buckets, brooms, sponges all types of brushes, baskets, leather satchels, even espadrilles.

It was a veritable Aladdin’s Cave for the home. There were three rooms dedicated to kitchenware; one room was for pots and pans and had every conceivable cooking utensil you could imagine, copper saucepans, enamel saucepans, woks, souflée dishes, huge jam making pots, schlemmer topf, every size of Le Creuset dish, etc. etc.;  there was another room just for knives, cooking knives, hunting knives, pen knives, rocking knives, mandolins, meat cleavers, potato peelers and so on; then there was a room for every other kitchen accessory, coffee pots, tea strainers, colanders, ladles, cutlery, crockery, you name it.  There were things hanging off the ceiling and stacked on the floor and displayed on shelves from floor to ceiling.

There was a glass cabinet along one end of the room, and there before my eyes was a duck press.  I had recently seen one in a video by Tim Hayward for The Guardian when he visited a Parisian cookery shop (the oldest one in France) , and so was thrilled to see one here.  It is used for one of the strangest French culinary practices dating back to the 19th century; the duck, having been strangled so it does not lose any blood, is partially roasted and then the legs and breast removed and cooked in a wine reduction.  The rest of the duck is then put into the press to extract the blood and all the juices, this is then reduced and thickened with the liver and served with the duck breast. You can still get pressed duck in a restaurant in Paris, Le Tour Argent, but I can’t imagine there being much call for the press in a domestic situation.

I was so mesmerised by everything, that I had forgotten what I was there for and was taken aback when a woman asked if she could help me.  After I explained what I needed, (I felt a tad stupid asking for a square of muslin amongst all these exotic culinary contraptions),  she went off and came back with a jelly bag with a wooden spool like thing to squeeze the juice from the fruit.  It wasn’t quite what I needed, but it would do the job and who knows one day I might even make some jelly.

When I got back later that evening I presented The Artist with the jelly bag; he now had everything he needed to get going on the marmalade.  It had been a long journey finding all the ingredients, but I felt I had seen and learned a lot along the way and I don’t even particularly like marmalade.

Located in the heart of the historic town of Tarascon, at the foot of the Alpilles and on the banks of the River Rhone, this townhouse dating from the 17th century has been fully renovated retaining many of the original features and is available for self catering holiday rental as well as being on END_OF_DOCUMENT_TOKEN_TO_BE_REPLACED