Most people when they think of Provence, think of sunflowers, lavender, sunshine, blue skies, a glass of rosé wine and a handful of olives on the table.  This is because most people who come here to visit do so in the summer months.  However, for those of us who live here the year round, we know a whole different side to Provence that most holiday makers never get to see; it is called the winter, and over the last few years it has become increasingly cold.  This year the temperature went down to -6° and if you add the wind chill factor of the Mistral, which was blasting us with freezing air from the Alps, you can add another -15° to that.

The locals hardly go out when the weather is like this and who can blame them; they close their shutters, huddle round their fires and wait for the wind to die down and the sun to shine again before venturing out.

However, mad dogs and English men going out in the the noon day sun and all that, I decided to meet my friend Celia Lindsell in Uzès on one of the coldest days of the year a couple of weeks ago.  Uzès is about half an hour away from me in the Languedoc Rousillon and a town I love to go and visit but would like to know better.   So I asked Celia, who has lived near Uzès for a number of years and used to have a shop in the old part of town sell, to show me a few of her favourite places.

We met in what she calls the PMU bar, but is in fact called Café de L’Hotel at 11 blvd des Alliés. 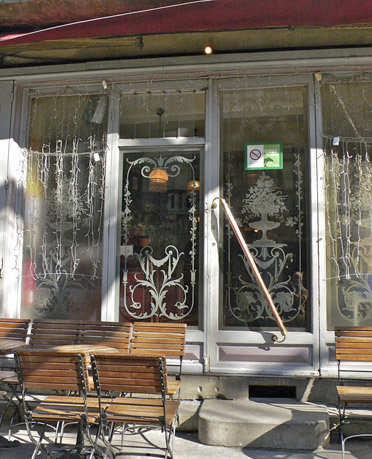 The reason it is known locally as the PMU bar is because, downstairs in the lovely art nouveau room with etched glass windows and a zinc bar, it is like many other French bars of that era.

and you will find yourself in a PMU, which stands for the French state controlled betting organisation, otherwise known as the betting shop!

You can buy a cup of coffee, glass of wine or pastis in the bar below and take it up here, study the form at leisure and have a flutter.

But we weren’t here to gamble and we didn’t loiter for long, we had shops to visit and shops in France close sharply at noon.  Uzès, like many Medieval towns, was built in a circle around the Duchy d’Uzès or the Duke’s Castle, which you can go and visit and if you’re lucky, you might even catch a glimpse of the Duke himself, whose family have resided at the castle for the most part of the last 1,000 years!

We walked along the road around the old walls of the town to our first stop which was the Quincaillerie, at 1, rue Jacques d’Uzes, 30700 Uzes.

Now, as readers of my blog know, I have a soft spot for these traditional hardware stores and it turns out that Celia does as well.

These sorghum brooms are hand made by a local craftsman who has sadly recently downed tools and retired, so if you live nearby, make sure you snap one up before they’ve all gone.

I am a sucker for these classic French shopping baskets, and decided I had to buy one.

As we left the shop and I was taking a photo of the exterior Celia kindly offered to hold the basket for me.  We then crossed the street to her favourite florist at 6 bis, rue Jacques d’Uzes.

This is where you can buy the CR pots that Uzès is known for and are still made in the traditional way.  They come in all sizes and are displayed in the courtyard at the back of the shop.

Inside the shop you can buy the plants to put into the pots, miniature olive trees, aged vines etc. and according to Celia they have the best tulips.  She described the shop to me as  “the funkiest florist in town”.

Moving on down the street we came to the Places aux Herbes, which is the main square in the centre of town.  This is where the market is on Saturday mornings (there is also a producer’s market on Wednesday mornings).

But don’t expect to see it like this in summer when it gets so packed you can hardly see the flagstones.  There are arcades along the square and at the far end of the square was our

next stop, Maison de la Truffe, otherwise known as the truffle shop.  Every year in the month of January, Uzès has a truffle festival, where you can buy truffles, watch pig and dog truffle snuffle demonstrations, taste a variety of foods imbued with truffles and eat a portion of the biggest truffle omelet ever made.  This shop takes the truffle theme and runs with it throughout the whole year.  As Celia was buying a tenderloin flavoured with truffles for her brother’s birthday, I decided to take a look around.  There was salt with truffles, which is apparently delicious with eggs…..

Truffle oil, nice to put in potato mash or over pasta,

Even mustard with truffles

There was also an aperitif with truffles, truffle pasta, truffle rice, brie with truffles etc. and  if you buy a truffle, you get half a dozen eggs thrown in that have been flavoured with the truffle through their shells.  On my way out I noticed a photo of Gerard Depardieu with the owners of the shop, he too obviously likes a truffle!

All this was making me hungry, and so we decided it was time to go and eat.  We walked back to the periphery road, rue Gambetta to a little place called Chez Françoise, 22 blvd Gambetta Uzès 30700.

Its a tiny place and all I can say is that if it was as full as it was on the coldest day of the year, I would come early to avoid disappointment (she only let me take photos because she knows Celia, she doesn’t normally court promotion).

Françoise cooks everything herself in the tiny kitchen in the back.  There is a plat du jour with three different choices and various cakes on offer.  I had a Tarte Salée, a savoury tart made with potatoes and  Celia had Tartiflette, a fitting dish for a cold winter’s day from the Haute Savoie, made with potatoes, lardons (bacon), onions and cream.

Fortified by our hearty lunch, Celia said she needed to go to check on the times for the screening of The Artist for that evening.   The cinema, called Le Capitole, 11 rue Xavier Sigalon 30700 Uzès  is on a street going away from the centre of town.

Inside it has a bar and a restaurant

They serve sushi at lunchtime between  12 and 14.30 as well as in the evening from 19h to 21h when they also serve soup and a simple plat du jour.  Whilst we were there, a man arrived who told us that his grandfather used to come here to meet with his fellow men working for the Resistence in WW2 (I sometimes wonder, with everyone’s grandparents having worked for the Resistence, who was left to collaborate?).

We left the cinema and walked along the ring road to Celia’s favourite Patisserie shop at 6 blvd Alliés, but sadly it was still shut for lunch, so she posed outside it for me instead.

On a normal day, she told me, you can expect to see a queue outside the shop as people wait in line for the delicious artisinal cakes and chocolates made and sold here.

We jumped into Celia’s car, she wanted to show me the cathedral, before we parted, it was not far, but Celia wanted to drive on home afterwards.

The Cathedral, Saint Théodorit d’Uzès, was first built in 1090, but rebuilt in the 17th Century.  The only part remaining from Medieval times is the bell tower, the Tour Fenestrelle, which was built to replicate the Italian campaniles in the 12th Century.

The interior of the church was mostly ransacked during the French Revolution and it was down graded from Catholic cathedral to parish church, which it is still today.

From the cathedral car park there are fabulous views over the surrounding countryside and the Vallée d’Eure below, where there are the remains of a Roman aqueduct and Uzèsians take their dogs for walks.

It was time to go home, we said our goodbyes and Celia drove off and as I retrieved my car I realised that Celia still had my bag.

‘Typical,’ I thought, ‘if you can’t even trust a friend’, I could tell all along that she’d had her eye on it….

A week later I met up again with Celia and she gave me my bag back, she had embroidered a heart on it!  Well it was Valentine’s after all!

If you would like to buy one of Celia’s heart embroidered bags, or see the many other accessories she has designed inspired by her life in Provence, please go to her website at celialindsell.com

Meanwhile please leave a comment for me here and if you would like to take me on a tour or your town, please let me know.

Located in the heart of the historic town of Tarascon, at the foot of the Alpilles and on the banks of the River Rhone, this townhouse dating from the 17th century has been fully renovated retaining many of the original features and is available for self catering holiday rental as well as being on END_OF_DOCUMENT_TOKEN_TO_BE_REPLACED