From the title of this piece, it should be clear to everyone that I have spent the last month in the UK.  The Artist’s daughter had come over to visit from Australia and Granny P (the Artist’s mother) gave a very grand party to celebrate the return of the prodigal grand-daughter in the gardens of her apartment in Bath.

The party was on Saturday and the men came on Friday to put up the marquee; they spent most of the day stripped to the waist, drinking cups of tea whilst putting up the tent.  It was a bit like witnessing a scene from a Merchant Ivory film.

Later when Granny asked where the Artist was and the answer came as “he’s re-potting the geraniums Mama” you could have been excused for thinking that you were inside a Noel Coward play.

The day of the party, the caterers arrived; apparently they were more used to preparing teas for the local Conservative Party than lunch for 60, but they did an admirable job. 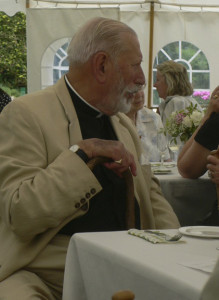 After that everyone tucked into  cold salmon, slices of ham on the bone, coronation chicken, quiches, pork pies and salad and the wine flowed as family and friends remembered old times and new friends shared their tales. 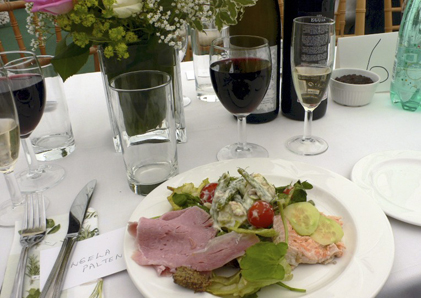 For dessert there was a strawberry Pavlova along with a Carribean Bakewell Tart which was a dessert I had not come across before.  I managed to identify some of the ingredients, dates, pineapple, rum and various spices; it was very delicious and I’ve been trying to get the recipe every since. 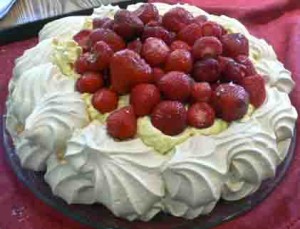 After the party we went back to London, Ealing, where we stayed with the Artist’s brother and his wife.  Whilst there, the Artist’s daughter and I drove to nearby Southall to have a Curry; one of the things we both miss about not living in the UK.  Not sure where to go,  we  went into a grocery store where we were advised to go to Gifto’s Lahore Karahi which was a five minute walk up the high street.

The restaurant has a large, canteen style room and serves traditional Pakistani dishes presented in a karahi dish (a round dish with handles made of cast iron, much like a Balti dish).

Alongside the room is an open kitchen, where you can watch the chefs preparing your meal.

The restaurant also specialises in Tandoori and BBQ dishes which they cook in the traditional tandoori ovens  which are deep pits with coals burning in the bottom.  The meet is threaded onto long skewers which is then suspended from the lip of the oven  and above the coals. 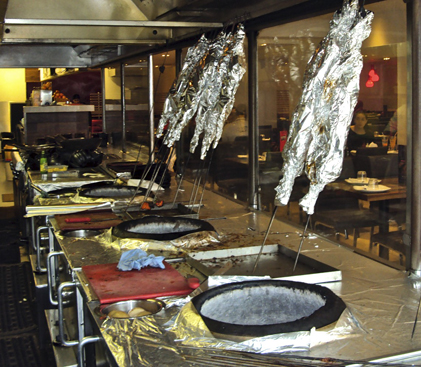 Whilst we were there, I watched them making naan bread; they roll out the dough into a circle which they place onto a little pillow,  they then press this against the wall of the oven, leaving the dough behind to cook.

Our  meal started with Dahi Puri, described as split crispy puffs, chick peas, potatoes, with a sweet tamarind sauce.  The sauce, being sweet, was not quite what we expected, (we obviously didn’t read the menu properly) and was probably an acquired taste. 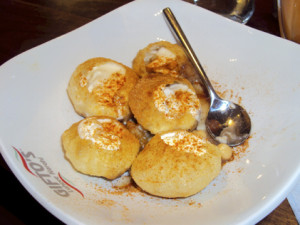 Next, despite all the varioius exotic dishes on offer, lamb trotters in gravy, brain cooked in tradional Lahori style, kingfish curry and quail tandoori, we stayed within the confines of familiarity and the Artist’s daughter had Butter Chicken (which she informed me was not even traditionally an Indian dish) and I had Karahi Chicken.  They were both very good and despite being medium hot, were quite spicy.

Afterwards, as we raced back to our car, (we’d overstayed our alotted hour) we had to stop and buy some fresh mangos, they were £5 for a box.

And we stopped to admire some shoes. 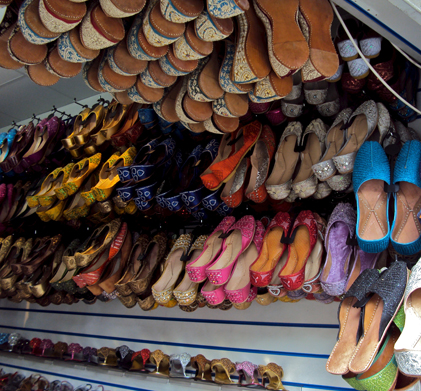 Once again, we could have been excused into thinking that we were in a Merchant Ivory film, albeit one set in another continent!

All comments are always gratefully received.  Just comment in the box below.

Located in the heart of the historic town of Tarascon, at the foot of the Alpilles and on the banks of the River Rhone, this townhouse dating from the 17th century has been fully renovated retaining many of the original features and is available for self catering holiday rental as well as being on END_OF_DOCUMENT_TOKEN_TO_BE_REPLACED